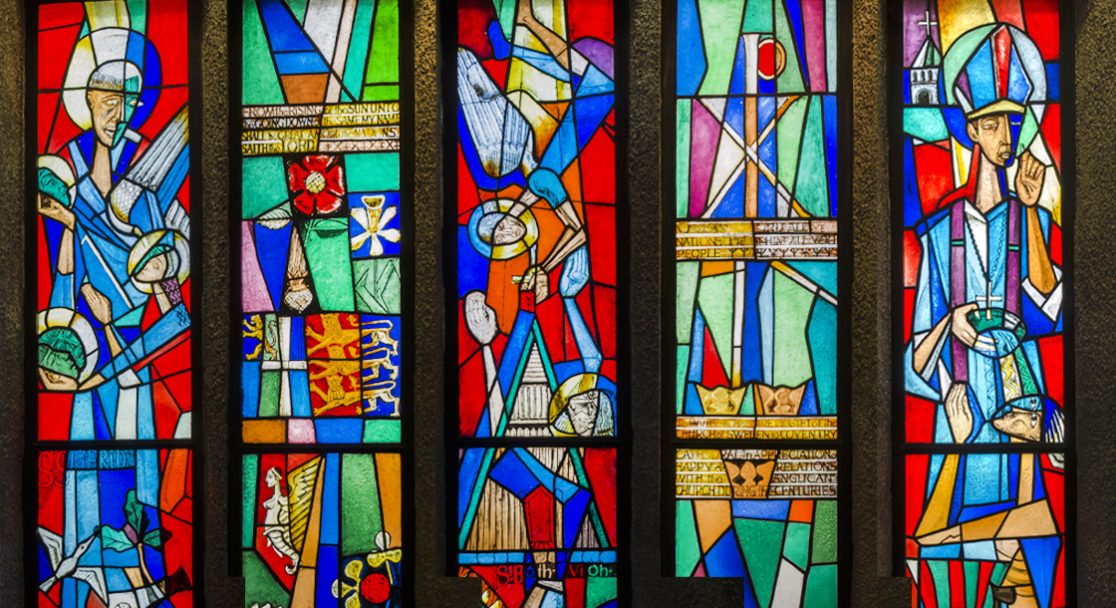 Two months in, the diamonds under the feet of the team at Coventry Cathedral, are coming into the light.

We were really pleased to be invited by our good friends and tech wizards, Suru Partners, to bid with them to create a new website for Coventry Cathedral – and even more pleased when that joint bid, won.

Perhaps 80% of our team’s work on this project, is at the front end of the process. We have to do a mass of foundation tasks – talking to staff and clergy at all levels, getting feedback from visitors, historical research and more – followed by design and copywriting. It includes a phase, which we are about to enter, when our work overlaps with that of the Suru team, who will design the CMS and build the site. First though, we have to wait – with a little nervousness – for some detailed client feedback, before the visual design work can begin in earnest.

A few days ago, we presented the wireframes and copy plan to the entire cathedral team.  All executive staff were invited to join the zoom call and, from offices, parks, cafes and homes, all bar one or two, did. (We didn’t get the Bishop. It turns out that bishops have little to do with the day-to-day life of their respective cathedrals. The COO, is the Dean.)

The wireframes presentation was fun (everyone loves to get involved) and we got an enthusiastic OK for what was broadly proposed. We’re now getting feedback from each specialist team, as they check in detail the sections which relate to their role, helping to identify necessary refinements. This stage is not without its dangers but, properly managed, they are minimal. The up-sides, on the other hand, are immense, especially if anything brave or controversial is planned. Hidden differences and views are brought out into the open and resolved before you go public, not afterwards. This is important to the success of the project: we need the staff to be fully on board. Their involvement in the process, maximises the likelihood of having this vital support in place from Day 1.

Famous for operating its 1962 cathedral alongside the bombed-out remains of its medieval predecessor, Coventry has many gems at which to stare in wonder, some so big and bright that they needed to be buried really, really deeply, to hide them from view. We’re still excavating but, thus far, a few notables stand out. They include:

The underlying story which explains pretty much everything.

Coventry Cathedral’s ‘sub-agenda’ is all about journeys of transformation from negative to positive, and the hope they give. Some of these are the work of the cathedral, such as the on-going determination to move from conflict not to revenge, but to reconciliation. Some are symbolic. The most obvious of these is the walk from the window-less, grey vista which greets you on entering the new cathedral, to the startlingly colourful, bright, nothing BUT windows view one has from the altar, at the other end (visible when you take communion and then turn around). Most visitors don’t know this, so don’t even think to go to the other end. Without the underlying story, the rationale for the new cathedral design, for keeping the old cathedral and for hosting sometimes radical artistic and politically and religiously sensitive events, is lost. Yet, some deeply hidden video interviews aside, there is no mention of it on the current website.

These include Elisabeth Frink, Graham Sutherland  and two by Jacob Epstein. Epstein’s earlier works include the terrifying and influential ‘Rock Drill’, which he later destroyed. His sculpture on the exterior of the new cathedral (St Michael’s triumph over the Devil) is the famous one, but Ecce Homo is arguably the more interesting. A sculpture of Christ, bound before Pilate, which sits in the ruins of the old cathedral, it demonstrates Epstein’s Aztec and African influences and shows an implacable, rugged figure. The contrast with the fay, ultra-Caucasian Victorian depictions of Christ with which most were (and still are) familiar, was so strong that many at the time found it profoundly shocking. Now, it just looks decades ahead of its time. The stained glass windows by the Swedish artist  Einar Forseth are also a brilliantly enjoyable, Picasso-influenced take on the medieval and Victorian traditions. Look hard enough within the current site and some of the artists do get mentioned  – though not Forseth and none of the actual works.

A Christmas Day 1940 BBC broadcast from the just-destroyed cathedral.

This is a beautiful, moving recording, massively important to the post WWII history of the cathedral and Coventry itself. It was made from the bombed cathedral by its then equivalent of the dean, Provost Richard Howard, supported by the cathedral choir. Broadcast just six weeks after the cathedral was burned down and nearly 600 Coventry people were killed, his message that they should resist the desire to seek revenge and instead seek reconciliation, is as clear as it is powerful. This recording is on the current website – but it is literally the last one on a list of past service recordings which spans 26 pages and some 300 mp3 files. Oh, and it has a URL slightly longer that the Great Wall of China, too, just to make it especially challenging for Google. Do listen to it – you can find it here.

From our point of view, of course, all of this is just fantastic, giving us the opportunity to add value in spades. It’s worth stressing though that, whilst few organisations have spectacular works of art hidden away, Coventry Cathedral is not at all unusual, in our experience, in having treasures which, in practice, it overlooks or undervalues. Which does beg the question – what gems would we find, if we took a look at your business?